Update on population projections for London Borough of Merton

Every year the demography team at the GLA give the council the option to run its own Borough Preferred Option (BPO) population projections. These are calculated using our housing trajectory (published in the Authority Monitoring Report each year), which is considered to be the best estimate of assumed development in Merton.

We are in the process of reviewing the population projections that the council should use to plan for future infrastructure needs alongside the New Local Plan and will update our approach accordingly.

In the meantime, the Borough Preferred Option population projection is available to download in Excel format.

Population and demographics data is an important tool in helping to understand a local area, the needs of the people that live there and how these change over time. As part of this information, population projections help local authorities to understand how changes in population will have an impact on future demand and how services can be delivered and designed to manage this. The population of Merton as well as London as a whole is projected to continue to increase, which will have an impact on a whole range of services, from housing, to school places, to the environment as well as on local health services and the voluntary sector.

A Guide to Population Projections has been produced to provide more detail about the different projection models that are available, their methodologies and how they are calculated.

This report is available for the following features:

It is essential to understand population size and characteristics in order to effectively plan and deliver services such as education, transport and healthcare. This section displays the latest population estimates and projections for Merton.

The projections below take population estimates as their starting point. The projected local authority populations for each year are calculated by ageing on the population from the previous year, applying local fertility and mortality rates to calculate the number of projected births and deaths, and then adjusting for migration into and out of each local authority. Fertility, mortality and migration assumptions are derived using values estimated using data from the five years before the base projection year, and do not take into account any known policy or demographic changes.
Please note: The population projections are unrounded to allow for analysis. Figures should be rounded to the nearest 100 if published. Please see the GLA's methodology documentation for information on this projection model.
Projected GLA population for 2020 and 2030 at a glance...

211,787
Total projected population
(2020) 

104,620

Population projections for all persons by broad age group

Population projection for males and females 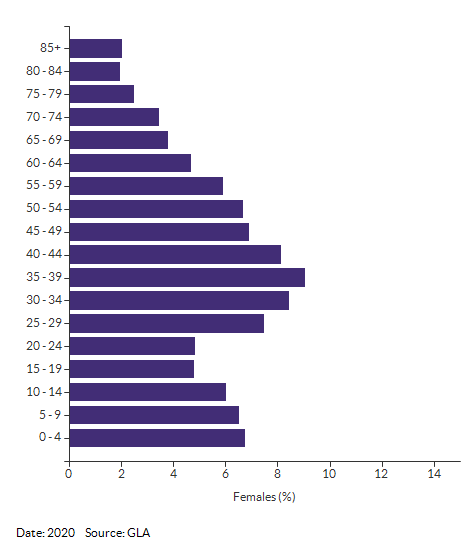 Population by country of birth - UK and non-UK

This site has been developed by Esri UK using InstantAtlas

Merton Data uses cookies to enhance your use of this site. You can read about the cookies we use here.